Last week Nintendo finally unwrapped their super-secret project NX. We finally got to know the name of the new console and got confirmation of when we will see it in stores. The name is Nintendo Switch and it will be hitting stores in March 2017. Many rumors and predictions were right!!

Unfortunately, Nintendo did not release a lot of details about the console other than a very short video about some of the key concepts behind it. In a nutshell, the new Nintendo Switch is a hybrid console, but you might wonder what do I mean by hybrid. Simple, it will be a portable console (think Nintendo 3DS) and a home console (think Wii U) bundled in one unique device. 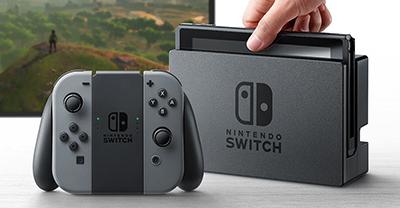 For years, I have thought that Nintendo was going to push for this hybrid idea, after the first time I saw the Nintendo Wii U, back in September of 2012 I thought: wouldn’t it make a lot of sense if I could take the tablet (controller) part of the Wii U everywhere I wanted and not be constrained to just my home? Then Nintendo broke news about the company merging their handheld and console divisions. Obviously, I started dreaming about a possible console that you could take with you anywhere you went but when you come back home you can easily dock into your TV and keep playing. That concept is exactly what was shown in the video for the Switch! Nintendo is basically making my dream come true.

Now the big question is: Is this new concept going to be a flop? There are many people questioning if this is going to go big or just finish off Nintendo from the hardware industry. Some of the main concerns are the specs of the machine and of course battery life. I am really wishing Nintendo could publish more details soon so we can feel comfortable about the new device. In the meantime, I am hoping it can be at par with the projects that Microsoft and Sony are working on for the next generation, otherwise we could be in trouble again as we won’t see many third-party titles published for the Switch, which seems to be the classic Nintendo curse.

In any case, I truly believe this is going to play well for Nintendo as they are following a classic strategy I have seen in many products that worked before. One very cool example of the way they execute is the Nintendo DS. Nintendo, when they announced the Original DS, said that the new console wasn’t going to be a replacement of the Gameboy line (it ended up replacing it), they also said it was a new concept and they basically introduced two key new ways of interacting with a videogame: two screens and a touch/stylus interaction (they made a big bet). I believe the Nintendo DS’s success was what made the Nintendo Wii happen. They realized people were OK with changing the paradigm of how they play videogames and that is why they went all in with the Wiimote. If you remember, that was a massive success and the Wii ended up causing a crazy revolution in the videogame industry, that gave space for Microsoft Kinect and PlayStation Move, which I believe opened our minds to the possibility of VR/AR games, which seems to be the next trend.

Nintendo is playing the same cards here, they already said that the Switch is not replacing the Nintendo 3DS, that they might be considering another handheld device. They already experimented with a larger handheld (Nintendo 3DS XL). They are also basically building on the most interesting concepts of the Wii U. Maybe the Wii U was a disaster, I truly believe the main problem was marketing, but the idea of a tablet-like controller and the ability to move around the house playing your videogames with it was a really cool one. The switch is building on that idea and taking it one step further. It will be really interesting to see how Nintendo finishes the execution of this console. I expect the screen to at least come with all the features the Wii U controller has, but I will be ok if it doesn’t, if that guarantees better battery life.

Some people are inclined to say, it won’t work, this is the end of Nintendo, but I would like to also remember some other things that have happened in Nintendo’s history. Nintendo has had a lot of consoles that didn’t go well. The classic example is the Nintendo Virtual Boy, it was a huge flop, bigger than the Wii U, Nintendo recovered and that set the precedent for 3D games, Nintendo later created the Nintendo 64 and had an amazing time with it (it moved the industry forward towards 3D games). The Nintendo GameCube was not very successful, I think it was a very conservative move on Nintendo’s side, but after it we got the Nintendo Wii (following on the steps of the Nintendo DS). Now Nintendo is coming with a console after the failure of the Wii U. I feel confident, that the Nintendo Switch will gather all the strengths of past failures and we will see a very interesting concept that will likely move the bar again in the videogames industry. The thing I love the most about Nintendo is that they are always trying to push the envelope in innovation. It is not just about making it more realistic or more powerful, it is always about being able to have fun with your videogames, at the end of the day, Nintendo’s mission has always been to entertain.

I am looking forward to March 2017, I will be among the first to get the system, for sure. I cannot stop thinking about the next Legend of Zelda and I can only imagine how playing Pokémon will be in the Switch.

I haven’t been excited about a new Nintendo console in a while, it feels refreshing. It makes me remember the first time I saw a video of the Wii. I disliked the name of the console, but the concept was cool and that is the reason I spent 12 hours outside of a GameStop in 2006 to be first in line for the preorder. This time I love the name and I love the concept so I will be first in line to get it again. I feel confident I won’t be disappointed.

View all posts by gcorvera